It was a dark and stormy night....in bed

Yep, it’s that time of the year again. Literary Review has just announced the 2012 nominees for their Bad Sex in Fiction Award. While more of a dubious distinction than a coveted commendation, this award is bestowed annually upon an author for truly awful fictional sex scenes in novels. 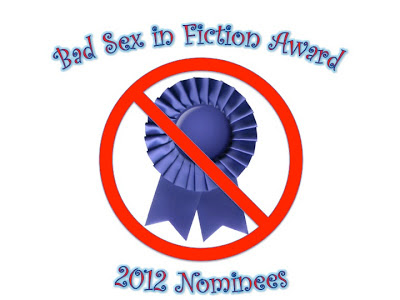 Besides good fun, the purpose of the prize is, according to Literary Review,

“ …to draw attention to the crude, tasteless, often perfunctory use of redundant passages of sexual description in the modern novel and to discourage it."

Overall, the chosen ones seem to take the award in good spirits. Said David Guterson, an American novelist who won the 2011 award for Ed King, a 20th century adaptation of the Oedipus myth:

“Oedipus practically invented bad sex, so I'm not in the least bit surprised.”

“Frankly we would have been offended if he wasn't shortlisted.”

So here’s this year’s shortlist of eight, in no particular order, which includes three females and two non-Brits:


The Yips by English author Nicola Barker: Interestingly, this book also made the longlist for the 2012 Booker Prize. Apparently no one on that panel read this passage:

“She smells of almonds, like a plump Bakewell pudding; and he is the spoon, the whipped cream, the helpless dollop of warm custard. She steams. He applauds, his tongue hanging out (like a bloodhound espying a raw chop in a cartoon).”


The Adventuress by Condé Nast’s managing director, Nicholas Coleridge, a Cambridge grad who studied theology and art history. Stay tuned for the 28 May 2013 release date, where you’ll find this:

“In seconds, the duke had lowered his trousers and boxers and positioned himself across a leather steamer trunk, emblazoned with the royal arms of Hohenzollern Castle. ‘Give me no quarter,’ he commanded. ‘Lay it on with all your might.’ Cath did as she was told, swishing the twigs hard onto the royal bottom. ‘More, more,’ he cried out. ‘Next time you will discipline me dressed as a nun."

Infrared by Canadian author Nancy Huston, who wrote her Master’s thesis (in French) on swear words, which are oddly missing in the following excerpt:

“He runs his tongue and lips over my breasts, the back of my neck, my toes, my stomach, the countless treasures between my legs, oh the sheer ecstasy of lips and tongues on genitals, either simultaneously or in alternation, never will I tire of that silvery fluidity, my sex swimming in joy like a fish in water…”

“She breathed hot into his neck and he plunged three rough fingers down the front of her jeans, making her squeak. She had never tried wu-wei in this situation before and Khünbish, hairy and slightly paunchy, she noticed now that he had his shirt off, was generating slightly more karmic energy than she had anticipated.”


Naughties by twenty-five year old Ben Masters, who studied English at Oxford University and is currently working on his PhD at Cambridge University:

“We got up from the chair and she led me to her elfin grot, getting amongst the pillows and cool sheets. We trawled each other’s bodies for every inch of history. I dug after what I had always imagined and came up with even more. She stroked my outlines in perfect synchrony until I was febrile in her hands, willingly guided elsewhere.”

Quiddity of Will Self by British author and former chess journalist Sam Mills, who also studied English at Oxford University:

“Down, down, on to the eschatological bed. Pages chafed me; my blood wept onto them. My cheek nestled against the scratch of paper. My cock was barely a ghost, but I did not suffer panic.”


The Divine Comedy by (yet another Oxford grad with a degree in English) English poet Craig Raine:

“And he came. Like a wubbering springboard. His ejaculate jumped the length of her arm. Eight diminishing gouts. The first too high for her to lick. Right on the shoulder.”


Back to Blood by token-American-on-the-list Tom Wolfe, who apparently has a Ph-freaking-D in “American studies” from Yale University - so much for mocking the Oxford grads for studying English:


Interestingly, since the award began in 1993, the winners have been overwhelmingly British and male. In fact, of the 19 winners, only two have been female and only five from outside of Britain. Which makes one wonder, are women naturally more gifted in describing intimate acts? Or is the pool of applicants just larger across the pond, with hordes of randy British men peppering their books with awkward sex?

“There is nothing more English than bad sex, so on behalf of the entire nation I would like to thank you."

Luckily for me, Nik’s not English.