When I was a kid, my dad often sent me and my sisters off to sleep with tales of The Meanest Man in the World. Although I can't recall the exact words, it always started something like this:

"No," he'd continue, his voice so quietly sinister I used to get goosebumps. "No. He was a mean man, The Meanest Man in the World."

Then the night's story would start. Oh, he was mean alright (the Man, not my dad!), with a particular penchant for torturing orphans. Not Hannibal-Lecter-style torturing, but psychological mind games.

Like the time he delivered a beautifully-wrapped package to the orphanage, bedazzled with ribbons and bows and sparkle and glitter. It was the first present the orphan had ever received, and was so incredibly stunning that the orphan just stared wide-eyed for hours. When he finally set about to unwrapping, he painstakingly removed the trimmings one-by-one, each more glorious than the next, and put them aside carefully (no doubt to relive this wondrous event over and over).

As he peeled back the layers he wondered with anticipation, what riches lay inside? A toy, perhaps? He'd never had a toy. Or maybe sweets? He'd heard of something called chocolate, where a single bite could fill one with joy. Or maybe a small puppy to love and to hold and to be his friend forever? He'd never had a friend. He almost dared not think it.

The last layer was off and all that stood between him and his heart's desire was the cardboard lid. His heart was pounding and he could scarcely breathe. He closed his eyes and slowly lifted the lid. Taking a deep breath, he opened his eyes and looked inside.

Any guesses on what he saw? 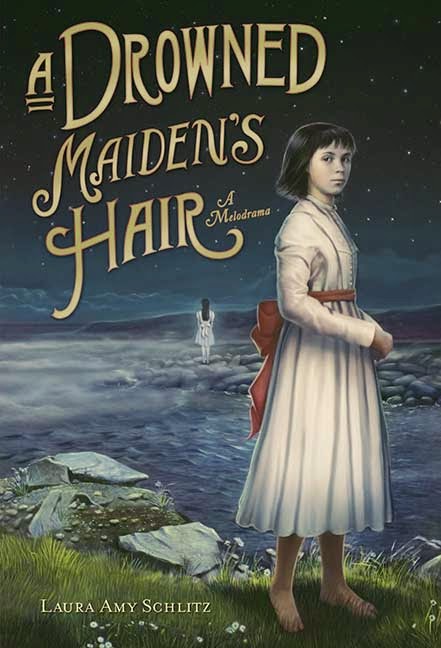 Anyway, decades later, I'm still drawn to orphan stories. Thanks to a recent discovery by Nik (I Judged a Book by Its Cover) I've had the pleasure of reading two absolutely fantastic orphan-themed books by Baltimore author Laura Amy Schlitz.

The first is Splendors and Glooms (titled Fire Spell in the UK). My local library had it filed away in juvenile fiction, but it definitely transcends this age group. The other, released a few years prior, is A Drowned Maiden's Hair (filed under Young Adult, presumably for content as the writing style is less complex than Splendors.) Both feature orphans pressed into service by not-particularly-nice adults. And both feature the deliciously creepy specter of long dead children who shape and influence events.

A Drowned Maiden's Hair tells the story of Maud Flynn, orphan and troublemaker, who's adopted solely to help her benefactors, the sisters Hawthorne, conduct fake seances for grieving parents. At first just happy to be out of the orphanage, Maud soon is torn between her desire for affection from her adopters, and her growing uncomfortableness with the deceit.

There's a great supernatural element that I love, woven in with very real human emotions, both good and bad. I enjoyed Splendors just a tiny bit more, but both are excellent choices for a shivery read.