Book or e-reader? Paper or pixels? 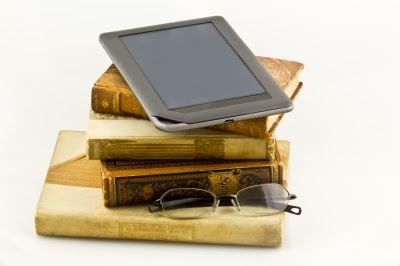 What’s your preferred way to read a book, in 2013 AD? I’m still very much wedded to paper copies. I love my home library of books: that I can dip into books I haven’t read for years. When I’ve been writing posts for this blog, I’ve surprised myself with how easy it’s been to find a quotation or a memorable passage from a book that I may not have opened for over 20 years. It’s all there at my fingertips.

Apart from when it’s not. A few years ago, I left the house to catch a train to Paris and omitted to pack a book. Quelle horreur!  So I searched on my iPhone and found an app called “Great Books”, loaded with a pile of classics. It has a really nifty feature where tilting the phone sets the scrolling speed, so there’s no need to press anything to move through the book. I read “Flatland”, which I’d been meaning to get around to for years, then re-read “Dracula” and “The Three Musketeers”. Having a pile of books in my pocket for occasional browsing was great!

Then along came the iPad (yes, OK, I’m an Apple fanboy; and yes, I am writing this using Pages on my MacBook Pro with a Retina Display). The bigger screen for the iPad makes a big difference to reading; but the real advantage that I found was in the interactivity offered by the tablet. I decided I’d like to re-read the Dorothy L. Sayers murder mystery novels, featuring Lord Peter Wimsey. I adore them, for the wonderful writing and characterization, and the way that they evoke the time in which they were written. Sayers was very erudite and well-read, and her books are peppered with literary quotations.

“You look,” said the Dean, “like a nervous parent whose little boy is about to recite The Wreck of the Hesperus at a School Concert.”

“I feel,” said Harriet, “more like the mother of Daniel.

I bet you won’t know both allusions there, so go on, do the Googling and experience the satisfaction of finding the answer! I went through the books on the iPad, and the experience was hugely enriched by the connectivity and the ability to pull together information that would be astonishingly difficult if not impossible if I were reliant only on my conventional books.

That said, I’ll still reach for paper in the first instance. What about you?

Posted by Anonymous at 4:54 PM