The Mystery of the Car Park King 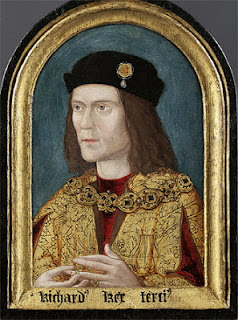 With all the news about the discovery of the skeleton of Richard III in a car park in Leicester, and all the forensic detective work that was done to i) find the skeleton, ii) prove it was him, and iii) describe in detail all the nasty things that happened to his body before and after he was killed, I thought it would be a good time to flag up a piece of detective work about Richard III that’s been around for some time.

And that is The Daughter of Time, by Josephine Tey. This is an absolutely brilliant book. If you don’t have a copy, you have to buy one now. Once you’ve read it, I’m sure you’ll seek out the rest of her books, but that’s for later. The Daughter of Time is an investigation of the historical legend that was built up around Richard III after his death, and if he really did murder the “Princes in the Tower”, his nephews. Shakespeare painted a pretty grim picture of Richard as a nasty scheming piece of work, a half-crippled hunchback. “Now is the winter of our discontent” etc.

Tey took the detective character she used in many of her books, Inspector Alan Grant, immobilized him in bed with a back injury, and had him work through the mystery of the Princes and whether Richard was the monster sketched by history or another man entirely. Well, what a fantastic way to communicate a brilliant piece of historical research! Rather than write a dry tome entitled “A Modern Reappraisal of the Life and Character of Richard III and the Mystery of the Princes in the Tower”, that would have sunk without trace, Tey wrapped the story into her fictional world and communicated it to thousands.

Posted by Anonymous at 8:22 AM