A hot bubble bath, blissfully kid-free (at least for a few minutes), with a good book and a glass of rich, Spanish wine – sometimes life doesn’t get much better.

Until, that is, the glass topples, you reach to save the wine, and in your haste, what once was a good book becomes a soggy mass as it sinks slowly into the sea of bubbles.

By the way, it turns out you can’t just place the sodden book on the edge of the tub to dry out. 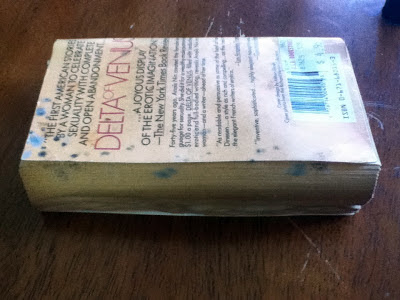 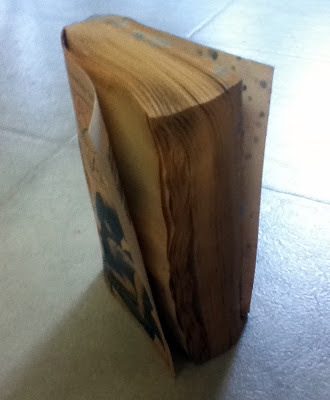 The truth is, though, I really wasn’t enjoying Delta of Venus all that much. I had purchased it in college on a whim after stumbling across an Anaïs Nin display in the campus bookstore. Amazed to find erotica displayed prominently alongside all of the, well, non-dirty books, I picked up both Delta of Venus and Little Birds. (Along with a pile of textbooks, odds and ends of school supplies, and a Go Bucks tee so I didn’t look like a total perv.)

I must’ve enjoyed reading the book at one point because it was still on my shelf after all these years. But with the passage of time and life and whatnot, I found that I wasn’t liking it much at all any more.

That’s not entirely true. I love the actual writing - beautiful, almost poetic prose (despite Nin’s instructions from her benefactor to “leave out the poetry”); vibrant imagery and rich texture.

But the subject matter? Oy, oy, oy. Pedophilia, rape, incest. About as unsexy as it gets.

Yes, I know Nin wrote the bulk of these stories for a private collector (for a dollar a page) and they weren’t published for the masses until after her death. Still doesn’t mean I have to like them.

Now granted I only read about 5 stories before dropping the book (but saving the wine – I chose wisely, as it were), and I do recall them getting less icky (i.e., consensual sex between adults) as the books progresses. But I still have zero desire to re-read Delta of Venus.

I won’t be replacing this book in my collection.