The Joy of Lexicons 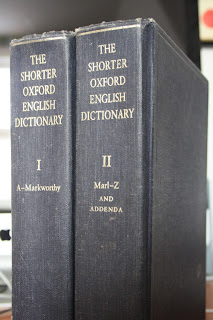 I was in my local library yesterday, and came across a real find. The library was selling off donated books to raise funds, with the last few being reduced to 50p each. On the bottom shelf were two old volumes of The Shorter Oxford English Dictionary.

Brilliant! I've wanted a copy of the Shorter Oxford for years. The "Shorter" is a relative term: the full OED is a 20-volume, $1000 monster, so you have to be using some pretty obscure words to need it! The Shorter itself is $100 on a good day, so even though it's an old edition, this was a real find.

I recall my earliest fascination with dictionaries began with the battered one my mother used to keep next to her chair, to help with the crossword. I decided to read every word and its definition, from the beginning, but was stymied when I was roundly chastised for crossing through the ones I'd completed with a pencil. So I can tell you what an aardvark is, but I'm hazy as to abalone.

I've always liked the Oxford English Dictionary, as it maintains the traditional usage and spellings: like realize rather than realise. There's a misconception that the former is an Americanization, but it's actually the latter that is a recent corruption, from French influence in words like compromise.

I've come to like the Chamber's dictionary as well, mainly because it's the one favoured by crossword composers (Colin Dexter says that crosswords are composed, not compiled!), so it tends to confirm whether or not you've landed on the right answer to a clue better than the OED.

The Shorter Oxford is a mine of information (OK, probably useless information) about the etymology and history of words. I may not use it often, but I'm delighted to have a copy on the shelf.