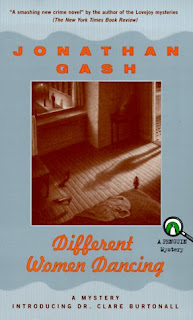 I’m a big fan of Jonathan Gash. A recent post here ("Very Public Diary of a Call Girl") reviewed a book that’s rumored to be one of his first pieces of writing: an autobiographical account of prostitution.

I’ve just finished re-reading Different Women Dancing, the first novel in a series of four set in the world of crime and prostitution in a northern English city (it’s Manchester, though that’s never actually explicitly stated). In fact, I wish there were a lot more in the series. Gash wrote 20-odd “Lovejoy” novels, set in the world of antiques crime, and I think this is his only other series, other things he wrote being one-offs. Gash is retired now (he was a medical doctor when not writing great fiction), so maybe there’s no chance of more to come. If you’re reading this, Mr Gash, I’d really appreciate just one more, please?

Different Women Dancing’s a fantastic read. There’s various things I like about it:
I only have one very minor niggle, which really mustn’t stop you reading the book. Towards the end, there’s a conversation on one page which a character plays back differently just a couple of pages later. I had to flick back and check “no, she didn’t say that”. So come on, Mr Editor. In fairness, if I’d stopped at the end of a Chapter and had a break I probably wouldn’t have noticed. It’s little glitches like that, “continuity errors” as they’re known on TV, that are rare enough to be surprising when they occur.

Jay read this one, too, so over to her soon for a better review than this!

Posted by Anonymous at 6:44 PM